Skip to main content
Despite COVID-19, we are fully operational. 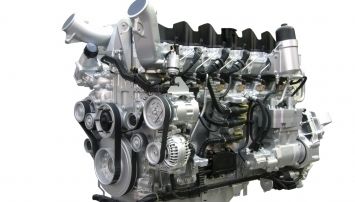 Mack Truck has been producing engines since 1916, first of which were 4 and 6 cylinder gasoline engines. By 1938 Mack started to make diesels, and in 1957 the END and turbocharged ENDT673 were introduced. In the 1960's Mack developed the Maxidyne high-torque rise engine. The Maxidyne revolutionized the industry because it allowed a heavy Class 8 truck to be operated with a 5 speed transmission, at an operating range of up to 1700 RPM. Previously, heavy trucks typically operated between 1800-2100 RPM and were equipped with 10 or more gears.

In 2014, Mack offered three new engines: the 11-liter MP7, the 13-liter MP8, and the 16-liter MP10, with a horsepower range of 325 hp to 605 hp, and torque ratings from 1,200 lb-ft to to 2,060 lb·ft. Mack MP engines are purported to be fuel-efficient and clean running, providing high power for low-speed, high-performance and severe-duty conditions, especially in off-road applications.